A monthly column by Doug Thompson

During the 1970’s. 1050 CHUM listeners almost constantly had the opportunity to win great prizes – $1000 with ”Don’t Say Hello”; $500 in the Time Marches On contest; the Million Dollar Movie contest; the $100 Derby; cash, concert tickets or albums with the CHUM Star Sign; Hawaiian vacations in the CHUM Money Machine; $1000 for the best news tip of the year; a Dream Date with David Cassidy; a chance to meet Donny Osmond and the Bay City Rollers; $1000 in CHUM’s Keeper of the Keys contest; all expenses paid cruises to the Mediterranean with the Ten Second Tongue Twister; $5000 with Celebrity Suspect; tickets to the Rolling Stones secret concert at the El Mocambo; the Five Grand Gold Rush; more cash prizes with the CHUM Memory Bank; the Summer Money Mix Up; the CHUM Birthday Payday; the Great Golden Cash Caper; CHUM Cash Call and the station gave away lots and lots and lots of cars - the Volkswagen Thing, a 1972 Chevrolet Corvette Stingray Sports Coupe, 4 Pontiac Astre GT Fastbacks, a 1974 Chevrolet Monte Carlo, plus Yamaha motor bikes, tons of CHUM T-shirts and on and on it went.

As great as the ‘70’s contests were, they most certainly didn’t start then…CHUM had ALWAYS had contests. In the 1950’s and ‘60’s, they might not have been as lucrative as the 1970’s, and some were corny as Kellogg’s Corn Flakes…but that was the era.

In this chapter of the CHUM Story, we’re taking a closer look at the CHUM contests from 1957. Since CHUM only launched it’s 24 hour Hit Parade radio in the Spring of ‘57, there were less than 8 months to make their mark that year and CHUM jumped in with both feet.

The station launched at 6am on May 27th, 1957 by playing “All Shook Up” by Elvis Presley. The very first CHUM chart dated that day, showed the Top 50 songs although only the Top Ten listed the name of the artist. The bottom 40 only had the song title. There really wasn’t room for the artists names as the other half of the inside of the chart had a cut-out coupon for CHUM’s first contest – a chance to win $25.00 by guessing the Top Ten songs for the following week. If there were multiple correct answers, those winners had to split the $25.00. This is most likely why so few of these early CHUM charts exist today as listeners cut the coupon off. 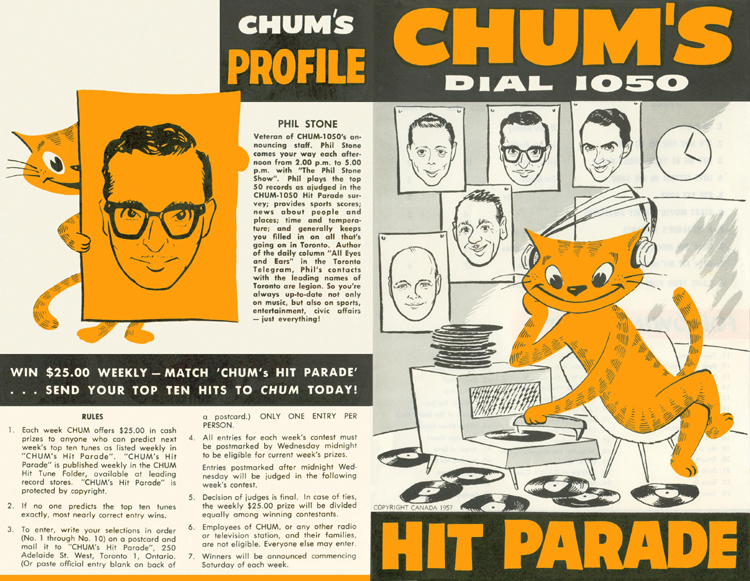 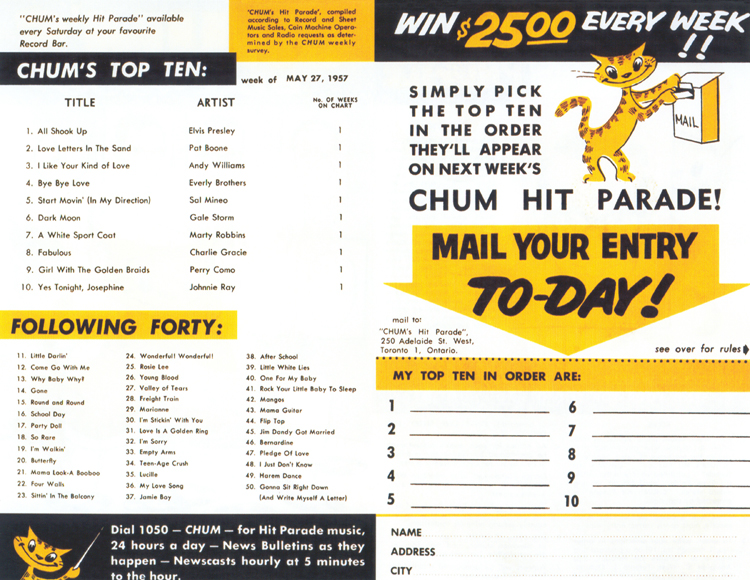 The ‘Guess the Top Ten’ contest lasted until the July 29th chart. The following week, August 5th featured a NEW contest, ‘Guess The Famous Movie Personality’ that was portrayed by the CHUM cat on the inside of the chart. Once again, there was a cut-out coupon to submit but this time, the prize money increased to $100. 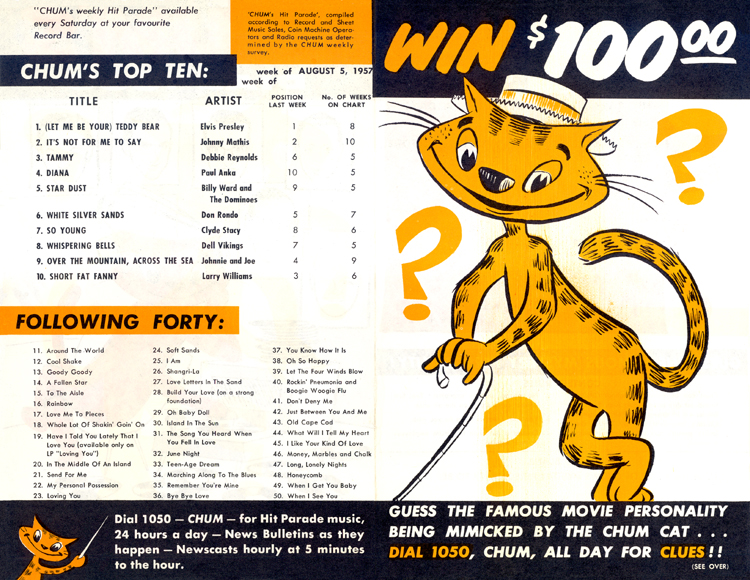 The chart contests continued next with ‘Guess The City that Clementine (the CHUM cat) is Now Visiting’. The right side of the inside of the chart featured a drawing of the cat in various Canadian cities. Again, the prize was $100. 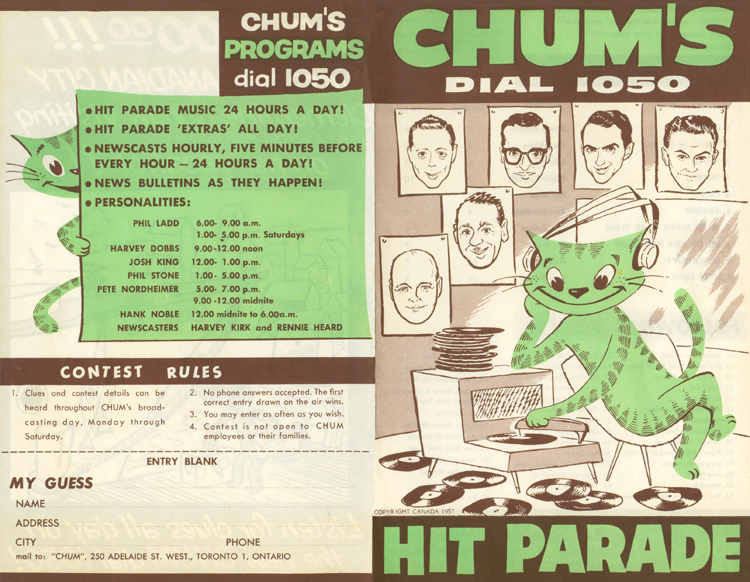 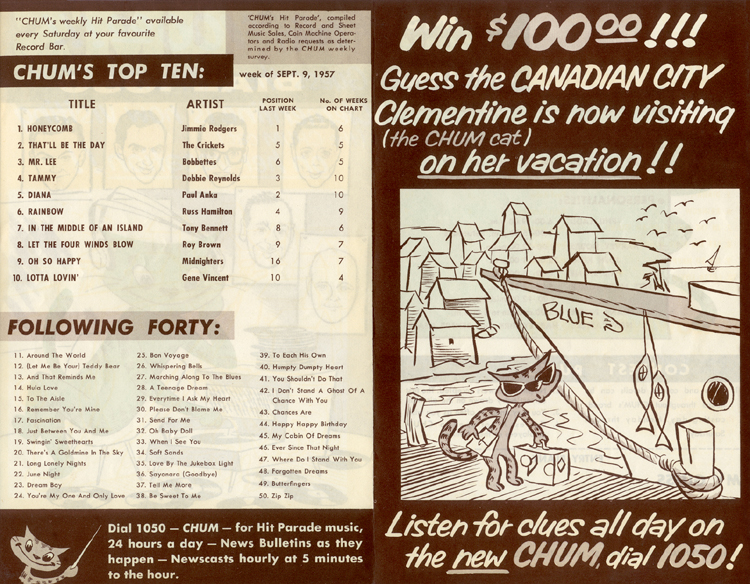 The ‘city’ contest ended in September while the next 5 CHUM charts promoted the stations’ new morning man Al Boliska. But this was CHUM after all, so they also made a contest out of his arrival by asking listeners to name the new CHUM morning show. If your name was chosen, you’d win $500. The winning was definitely on the rise for CHUM listeners. As this was over 60 years ago, the name CHUM chose for the Al Boliska morning show is lost in the mists of time, but you can see at the bottom of the chart below some of the suggested names that listeners had submitted. 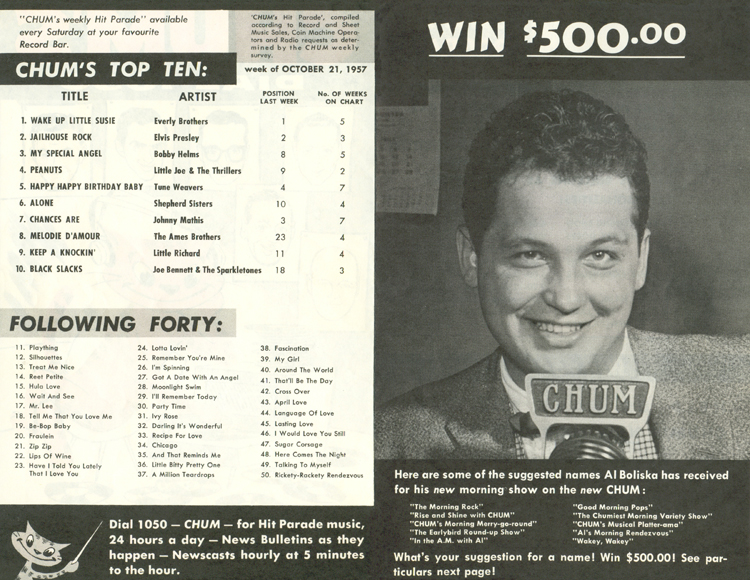 And this was only the first 7 months and 5 days of ‘the new CHUM’.

Next time, the contests and promotions from the final two years of the 1950’s.

RETURN TO THE CHUM TRIBUTE SITE