A monthly column by Doug Thompson

On the first day of January, 1958, CHUM’s success had been nothing short of spectacular. In only 7 months and 5 days, the ‘new CHUM’ captured the attention and the ears of Toronto’s youth. And the word was spreading. Mind you, not all of those words were good. Many national advertisers adamantly refused to spend money on this ‘raucous noise’ as some called it. Mr. Waters, by his own admission, almost cancelled his 24 hour rock and roll experiment several times. Even some of his close friends were questioning him. Despite all of the negativity, Mr. Waters stayed the course. But 1958 and ’59 would bring major changes to the station and its fortune. Ten years later, the same thing would happen again and those changes would take 1050 CHUM into a whole new stratosphere.

But we’re getting ahead of ourselves.

By January of 1958, rock and roll was still in its infancy. You can tell just by checking the January 6th CHUM chart below. Non rock names like Tony Bennett, Mitch Miller, The McGuire Sisters, Frank Sinatra (twice), Roger Williams, Johnny Mathis, The Four Lads and Billy Vaughan were scattered throughout the Top 50 hits. But there were a few genuine rockers in the mix, including Elvis Presley, Gene Vincent, Chuck Berry, Jerry Lee Lewis, The Crickets and a couple more. 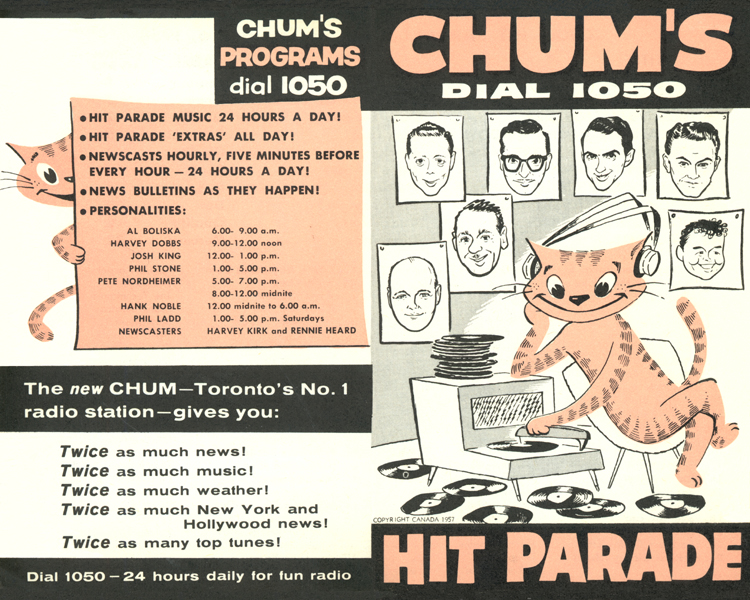 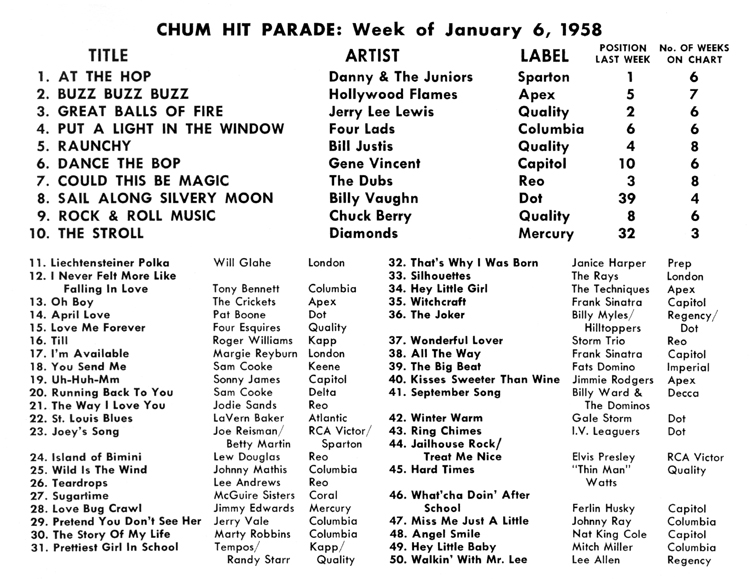 The 1950’s and ‘60’s were also the era of novelty records, although they too would migrate into the 1970’s albeit in smaller numbers. Country music crossovers like Sonny James, Ferlin Husky and Marty Robbins made their mark on the CHUM charts back then as well.

In 1957, the CHUM chart had often been an additional source of information about the various CHUM contests. But that changed in ‘58. From the January 6th chart up until the April 21st chart, the back page strictly promoted the on-air DJ line up. CHUM’s Program Director Phil Ladd is listed as being on-air Saturday’s from 1 to 5PM. Phil had been replaced (or he possibly replaced himself) by Al Boliska as the weekday morning DJ in the fall of ’57 (Phil’s caricature is the one on bottom of the far left, just above the record player). And although he most likely wasn’t aware of it, Phil’s days at CHUM were numbered. In the spring of 1958, Allan Slaight had been hired from CHED in Edmonton to be Production Manager (his official title). Within a few short months, Allan Slaight became CHUM’s Program Director. By April of ‘58, all night DJ and country singer Hank Noble had left and had been replaced by Jay Jackson, although the caricature on the CHUM chart was still of Hank Noble (top right above Al Boliska on the chart below). Unfortunately, Jay wasn’t at CHUM long enough to get his own caricature. On the same day that Allan Slaight arrived at CHUM, a brand new all night DJ arrived at 250 Adelaide Street (where the CHUM studios were then located). Bob Laine grew up in Toronto and inspired by CHUM’s new sound, had launched his radio career at CFRS in Simcoe, Ontario in 1957, working for that station’s co-owner Fred Sherratt, who later would become an important part of CHUM.senior management. Bob Laine’s caricature wouldn’t appear on the CHUM chart for a few months. 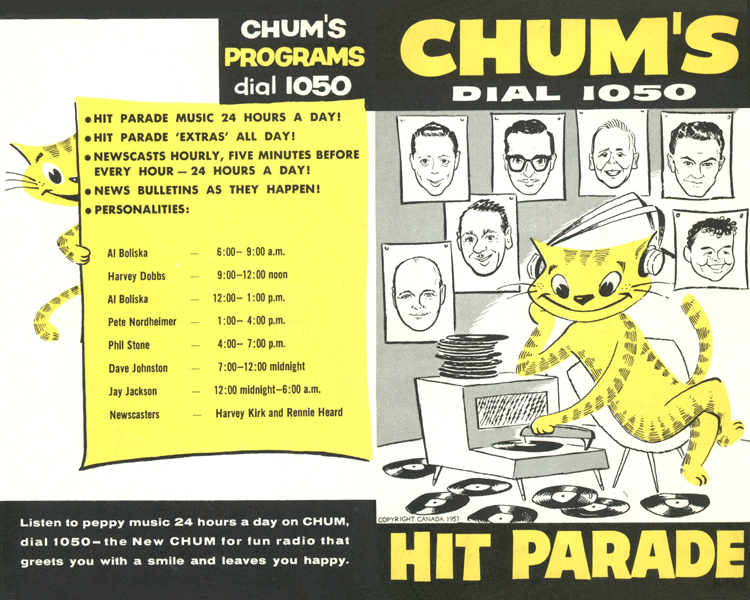 Changes! Changes! Changes! Dave Johnson’s caricature (top row second from the right on the chart above) had replaced CHUM’s country DJ Josh King on the January 20th chart. Al Boliska was now hosting King’s noon to 1PM slot. The one hour show was in addition to the CHUM morning show and Boliska was not very happy doing this extra shift.

Beginning with the April 28th chart, the back page of the weekly CHUM chart exclusively promoted a new weekend feature, ‘Holiday with CHUM’. John Spragge, at the time a broadcasting student at Ryerson, had been hired part time for weekend shifts to work alongside CHUM newsman Harv Kirk (later to become Harvey Kirck of CTV National News). 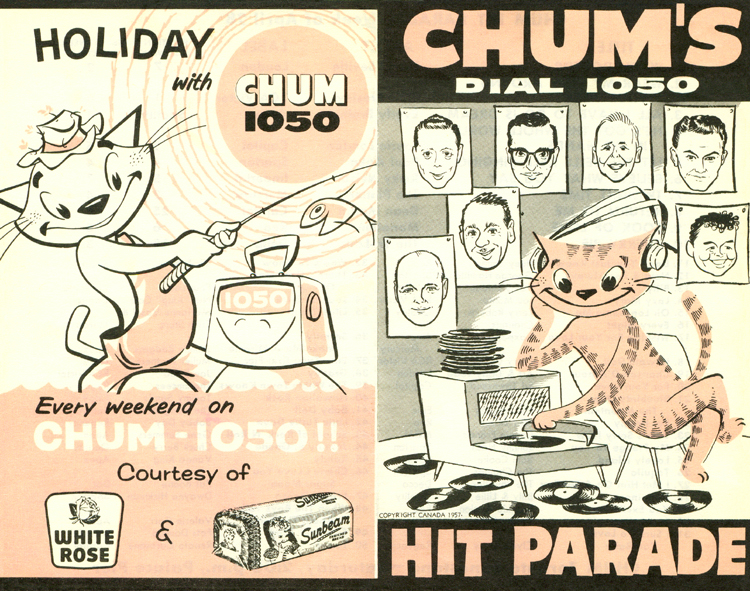 The final chart promoting ‘Holiday With CHUM’ was July 21st and it still had the caricature of former Program Director Phil Ladd as well as all night DJ Hank Noble, even though Bob Laine had been the host of ‘Music Til Dawn’ for several months and both Noble and Ladd had left CHUM. It took a bit of time for the chart changes to be made and in fact, Noble and Ladd’s caricatures would remain on the CHUM chart until August 25th.

By the way, for those curious about the CHUM cat mascot that adorned the front of the CHUM charts, she (and it was a female) was meant to portray a ‘cool cat’ and was an adjunct to the station’s early slogan of ‘The station that purrs’. The cat caricature had been commissioned by Mr. Waters. CHUM’s staff artist (and later Art Director) Ben Wilson, who had originally designed the CHUM chart and most of CHUM’s print promotion pieces, had drawn the cat and as any cat lover knows, every cat has to have a name.

The CHUM cat was no different.

The naming of the cat was yet another CHUM listener contest in ’57. Notice that while the winner announcement page spelled the cat’s name Clementyne, the postcard asking for comments on CHUM’s new programming spelled it the more traditional way as Clementine.

From the CHUM chart dated July 28th, 1957, the back of the CHUM chart for most of the rest of that year featured a photo of a CHUM Top 50 artist, the first subject was Elvis Presley promoting his soon-to-be-released LP “King Creole” as well as CHUM DJ Dave Johnson’s show. That was followed throughout the rest of the year by many more as shown below. For some reason, the CHUM chart with Ricky Nelson on the back had the cat facing right instead of left. As well, the caricatures of the CHUM DJ’s were reversed as well. 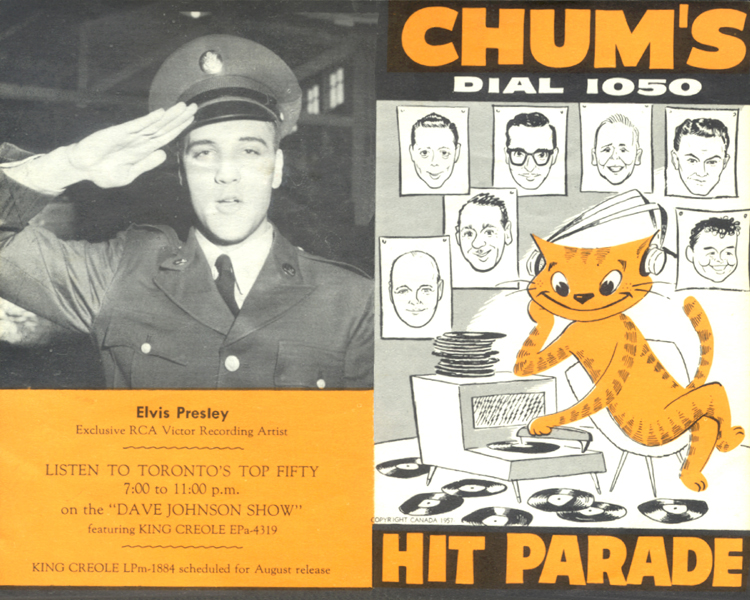 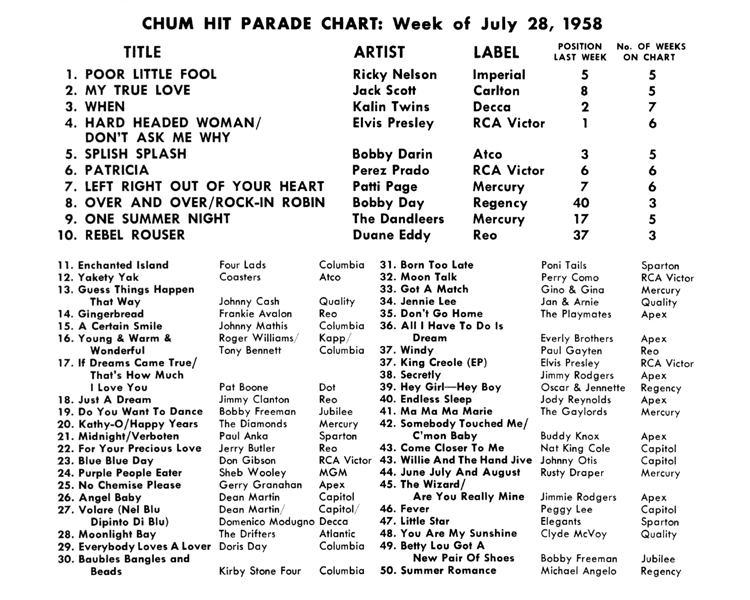 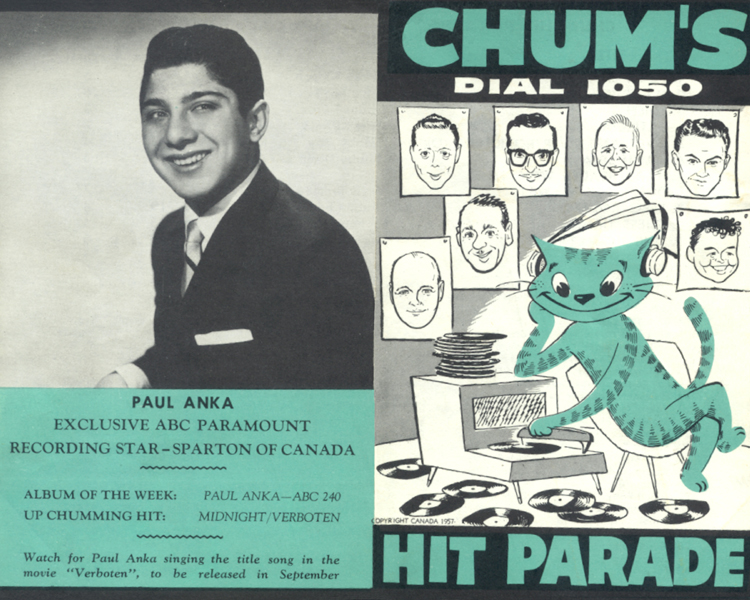 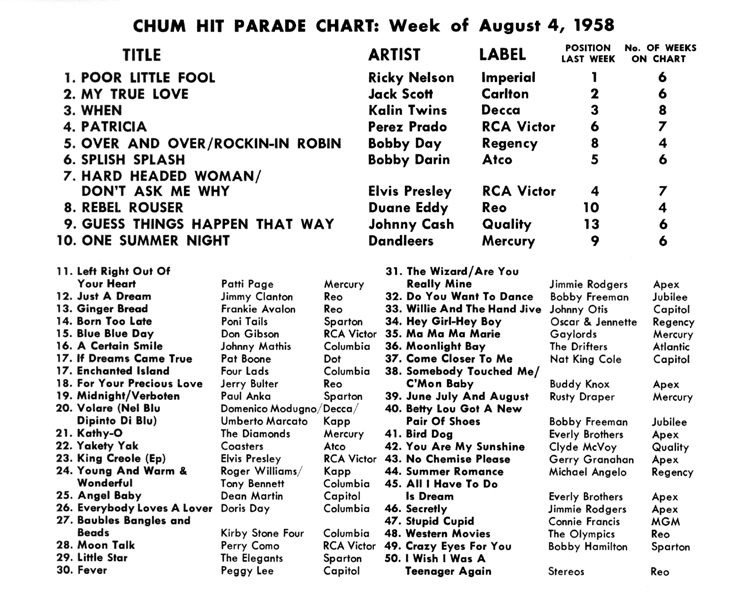 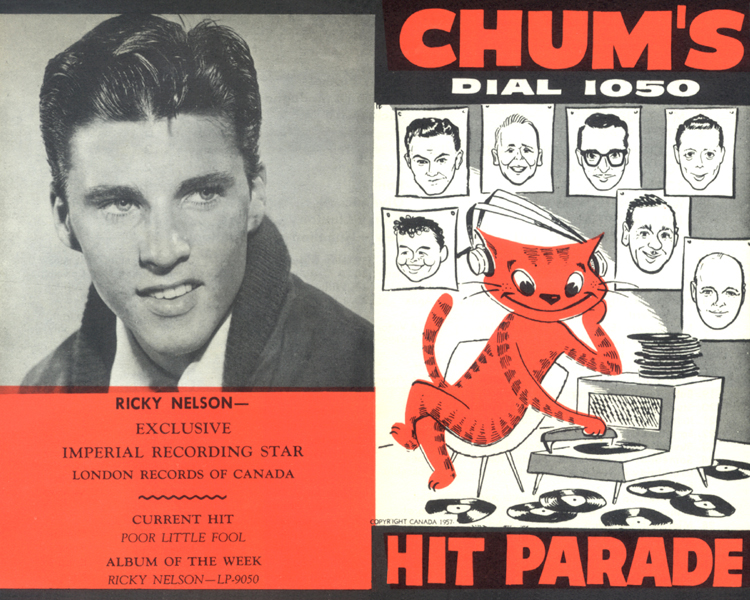 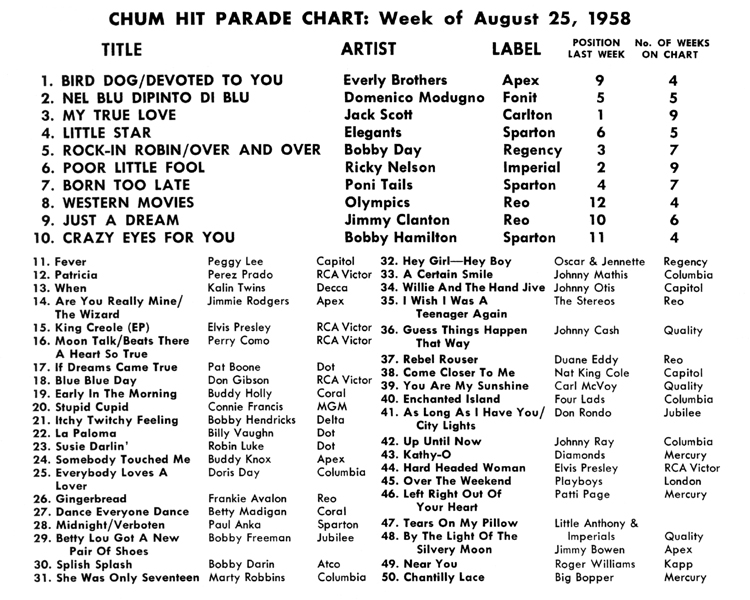 The CHUM chart of September 1st, 1958 finally removed Hank Noble and Phil Ladd’s caricatures and replaced them with Bob Laine and John Spragge, who had been hired full time. John would become the ‘Housewives DJ’ for the next ten years and Bob Laine would be CHUM’s all night guru for the next ten years before moving into daytime in 1968. Incidentally, this was also the first chart where the names of the CHUM DJ’s were added to the bottom of each caricature. 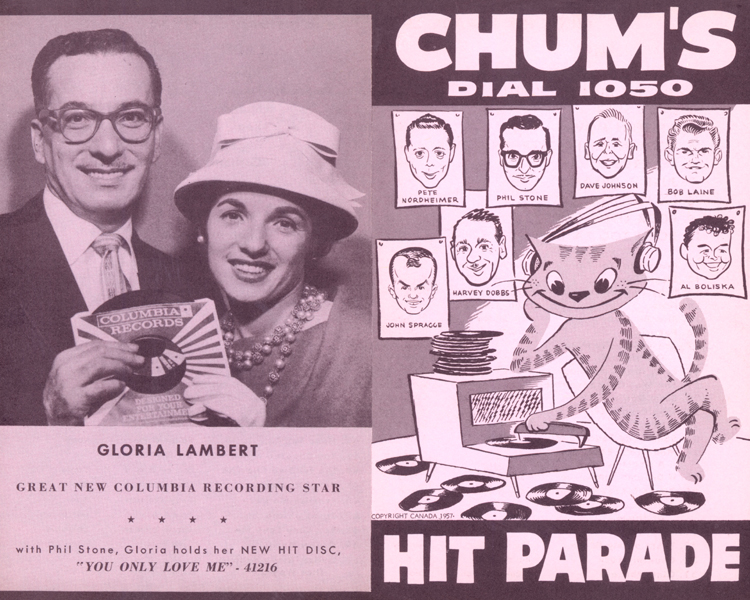 There were only three departures from featuring artists on the back of the CHUM chart for the rest of 1958. The first was on October 6th which featured early afternoon DJ Pete Nordheimer with one of the winners of CHUM’s weekly ‘Woodbury Dream Girl of the Week’ contest. 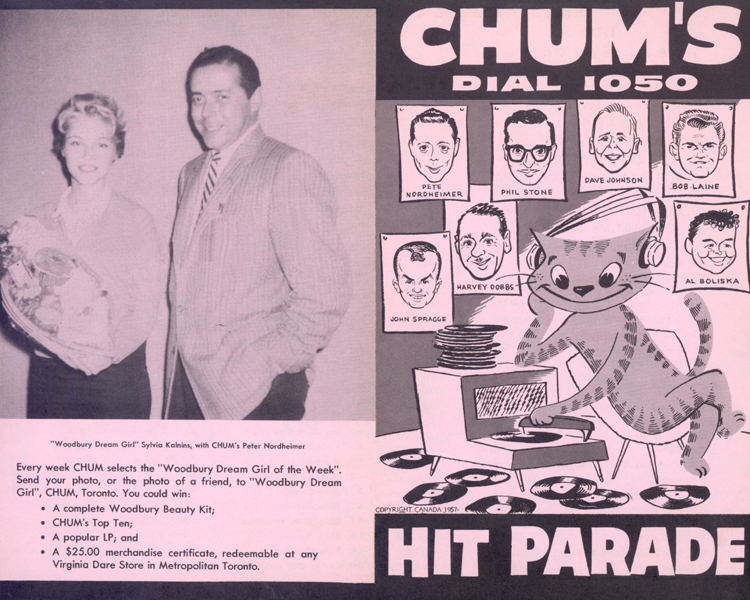 Then for the CHUM charts dated November 17th and December 1st, there were back page ads for Wonder Bread’s Nu-Whip loaf. Many of CHUM’s promotions of this era were sponsor oriented, which was something Program Director Allan Slaight and National Sales Manager Wes Armstrong had been working on since Slaight got to CHUM six months earlier. CHUM’s advertising revenue was most certainly on the rise. 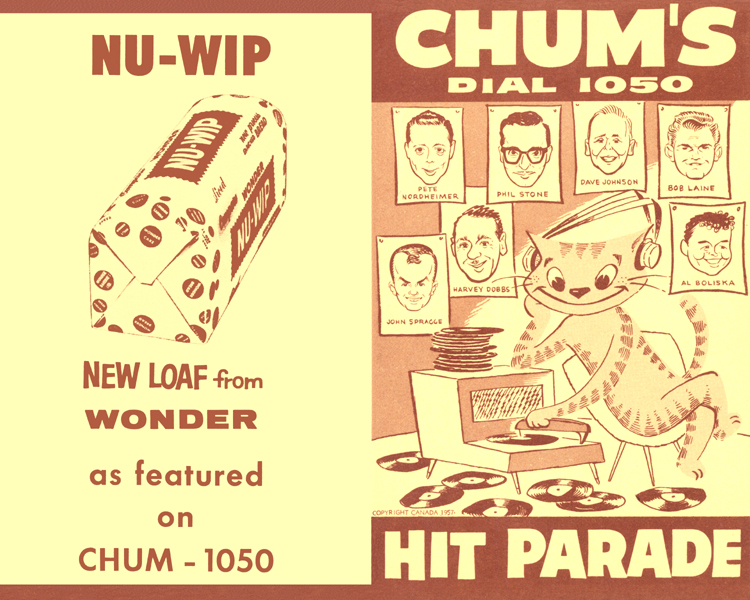 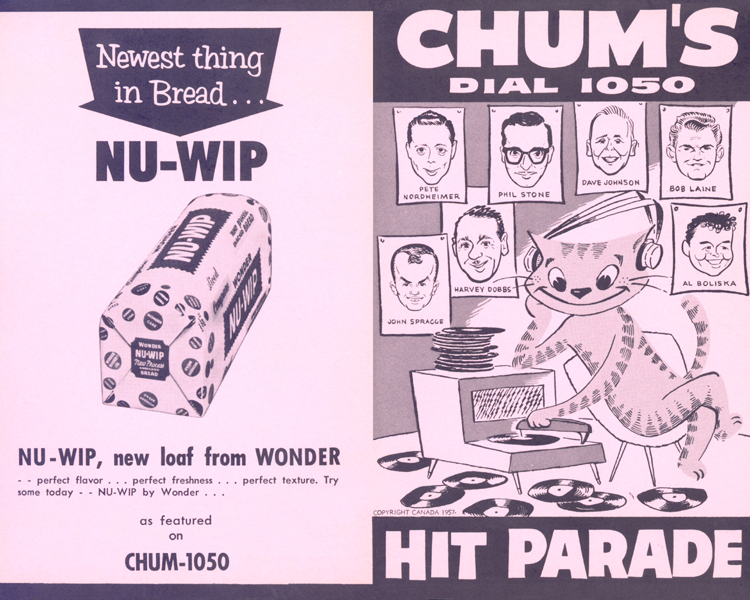 December 29th was the final CHUM chart for 1958. The number one song was “The Chipmunk Song” by The Chipmunks with David Seville (real name: Ross Bagdasarian). This was the third week at the top of the chart for the vari-speeded rodents. In case you weren’t aware, The Chipmunks, Alvin, Simon and Theodore were named for executives at Liberty Records, Bagdasarian’s company. Alvin was Al Bennett, Simon was Si Waronker, and Theodore was Ted Keep. 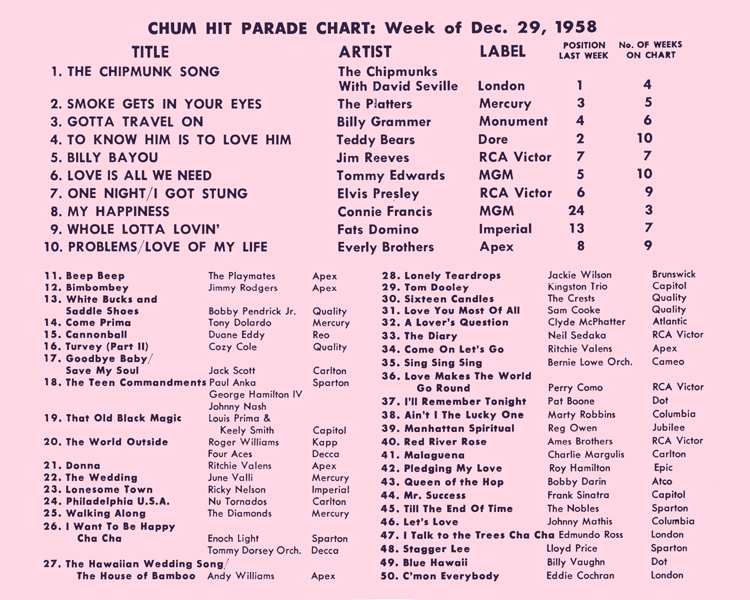 While there were quite a few on-air changes at CHUM in 1958, the following year would bring a whole lot more.

NEXT MONTH: THE CHUM STORY (PART 3) 1959 AND THE ZANINESS CONTINUES