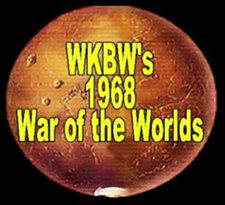 It was theatre of the mind, on one of radio's biggest stages.

On Halloween Night 1968, Buffalo's 50,000-watt blowtorch WKBW did an updated version of Orson Welles' War of the Worlds, about a Martian invasion of Earth. The brainchild of WKBW program director Jeff Kaye, the show faithfully followed the script of the Welles' original, but added local references and used reporting technology that did not exist in 1938, when the original aired on CBS' Mercury Theatre of the Air. The 1968 version was presented as if it were part of the station's Top 40 format, complete with the tunes. If you weren't paying attention to WKBW's numerous disclaimers, you would have thought it was real.

Three years after the original broadcast, WKBW reprised it.

Jack Armstrong is the disc jockey this time. Program director Jeff Kaye reads the disclaimer at the beginning of the broadcast.

WKBW did a third dramatization of "War of The Worlds" in 1973, this time with Shane as the jock.

Now and then you discover a radio talent that just knocks you off your feet.

Such is the case with Sam Ward.

Sam, a long-time radio buff with an encyclopaedic knowledge of music, first came to our attention in 1996 when we were introduced by a mutual friend. The depth of Sam's knowledge of radio and music totally awed us, and we were pleased several years ago when he started web site (now defunct) devoted to these twin topics.

Sam's theme-driven show, Looking Back Again, a tribute to Don Daynard's long-running Looking Back program on CKFM Toronto, is pure radio magic. Few announcers connect one-on-one with the listener like Sam does, and even fewer have his knowledge and passion for music. What's truly amazing is that does all the production, announcing and research on his show, including finding the tunes, despite the fact he's totally blind.

One of our favourite Looking Back Again shows is Sam's Halloween "Spooktacular" in 2008.

OK, boys and ghouls, listen in.

Using his best Count Dracula voice, Freddy Vette spins some spooky sounds from his dreadful dungeon of dusty discs on his 2014 Halloween special.

It's nearly an hour of alarming audio, hair-raising hits and terrifying tunes from the deepest and dungiest regions of music's mustiest mausoleum.

The Wolfman returns (well at least his ghost does!)

Freddy Vette brings back Wolfman Jack in this great special from Halloween 2015. Deftly switching between his own voice and his Wolfman Jack character, Vette delivers a stellar performance. It's the type of entertainment that makes Vette's Monday-Friday CJBQ program so special!

Enjoy Freddy Vette as "The Ghost of the Wolfman" on CJBQ here.

It's a trip back to the time when street-corner harmonies filled the air and the airwaves. It's "The Doo Wop Chop Shop" onNorthumberland897.

The show - founded in 2016 by program director Jim Glover (Jodi Losee and the late Jon Holland co-hosted) - was started "as a way to introduce listeners to early rock and roll. So I thought what better way to do than than with a great Alan Freed-type rock show. Really it's a Saturday night dance party."

And where did the name of the show come from? Jim told us, "I like names that rhyme and thinking about classic car shops. I knew as we all know about chop shops. So that was the name - Doo Wop Chop Shop. It also allowed us to play some great car songs in the show." 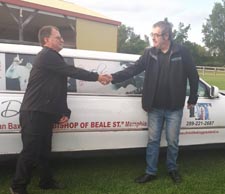