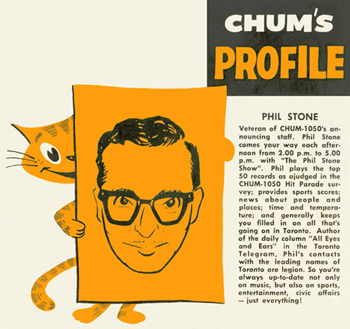 CHUM took a trip down Memory Laine, and left no Stone unturned.

To celebrate the station's 50th anniversary as a Top 40 station in 2007, CHUM brought back many of its former air personalities including former jocks Duff Roman, Scott Carpenter, Mike Cooper, Jim Van Horne, Chuck McCoy, Duke Roberts, Donnie Burns and the former morning team of Bob Magee, Samantha Houston and Robbie Evans. Bob Laine did a couple of shows and during one of his segments he interviewed Phil Stone, one of the first-day jocks when CHUM switched to a Top 40 format May 27, 1957. Stone, who left the CHUM airwaves in 1959 to go into the station's management, was 93 years young when he did this interview with Laine. Sadly, he died less than a year later, on May 1, 2008.

Check out The CHUM Archives