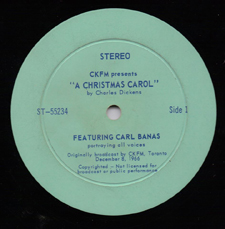 It was a Christmas tradition for years - Carl Banas's live reading of the Dickens' classic "A Christmas Carol."

Banas, the man with the deep voice and smooth style, occupied the evening shift at CKFM from the '60s until his move to Toronto rival CJEZ in 1987, retiring from radio in 1992. A highly sought-after voice talent, he was also a TV actor, playing detective Byron James in the series Wojeck. But he may be best remembered for his annual renditions of A Christmas Carol, where he utilized his amazing voice skills to play multiple characters in the timeless classic. One of those renditions was captured on the Polydor Records release, A Christmas Carol. This recording comes from CKFM.