The CHUM Chart: A History

(Note: Much of the information below is gleaned from Ron Hall's excellent publication, "The CHUM Chart Book." I've added and expanded on that information. Chart scans courtesy Ron Hall.) 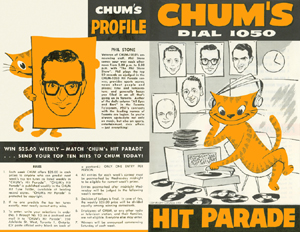 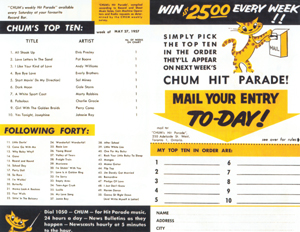 On May 27, 1957, CHUM radio in Toronto made two changes that would prove very historic. They became the first station in Canada to program Top 40 hit music, 24 hours a day. Also, they began a tradition that would last 29 years with the weekly issuing of the CHUM Chart.

It was not unusual for Top 40 stations to issue their own weekly music charts in 1957. Several North American stations were issuing charts by that time; also common were informal charts like Hound Dog Lorenz's weekly list for WKBW.

From May 27, 1957 to June 14, 1986, 1,513 CHUM Charts were issued without interruption (the last chart was prepared but never issued; there was one week in 1971 when two charts were issued). This extended run made it the second-longest continually issued music chart by a private North American radio station in history (the record of 32 years - from 1960 to 1992 - is held by Hamilton's CKOC).

Few of the first CHUM charts survive. One reason for this is that on the early charts listeners were asked to fill out a form on the chart, tear it off and mail it in. Many of the early charts were simply destroyed. Also many people simply never thought to save these early charts - who knew at the time it would last 29 years?

For the first 26 charts, the songs were listed as "CHUM's Top Ten", followed by "The Following Forty." On the top 10, song and title were listed; the following forty listed only songs. The cover of the original chart on May 27, 1957 featured a "Disc Jockey Cat" known as Clementine accompanied by caricatures of the CHUM deejays of the day - Phil Ladd, Harvey Dobbs, Josh King, Phil Stone, Pete Nordheimer and Hank Noble. Oddly, no names were attached to the pictures, so we were left guessing as to who was who (the lineup appeared on the back). It is interesting to note that this music survey was not called the CHUM Chart in the beginning - the name was "CHUM's Weekly Hit Parade." In fact, the name CHUM Chart did not appear on the cover until 1961. The first number-one song was "All Shook Up" by Elvis Presley.

The first major change took place with the 27th chart, dated November 25, 1957. The size of the chart was halved and for the first time all 50 songs were listed by song, title and label. Also a new face appeared on the cover, that of Al Boliska, who replaced Phil Ladd as morning man (Ladd went to weekends). It was the first of many changes in terms of on-air personnel over the years.

With the chart of April 28, 1958, CHUM ceased to publish its lineup on the back cover. But beginning with the chart of September 1, 1958, CHUM finally got around to identifying those deejays on the front cover. For the record, the names were Pete Nordheimer, Phil Stone, Dave Johnson, Bob Laine, John Spragge, Harvey Dobbs and Al Boliska.

On March 16, 1959 another new feature was added - Top Ten Albums. The first number one album was "Come Dance With Me" by Frank Sinatra. This album chart disappeared October 24, 1960 - replaced by a listing of CHUM's Top 10 from one year ago and from two years ago.

Several design changes were made in the early '60s. On January 25, 1961, "Clementine", a disc jockey cat playing 78 rpm records, was replaced by an unnamed kangaroo, playing 45 rpm records. 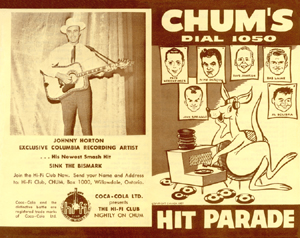 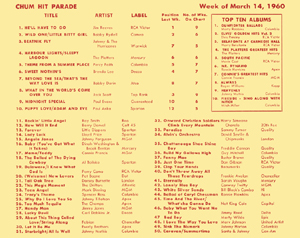 The kangaroo was short-lived - it disappeared August 21, 1961 - replaced by a "music note" with caricatures of CHUM deejays hanging from it.

A major addition in 1961 was the introduction of the "Chumdinger", the song that made the biggest jump from one week to the next. This popular feature continued until 1968.

In November, 1962, the Moose Parade - a listing of the top 10 country hits - appeared for the first time (CHUM had a country show hosted by Moose Latreck). The CHUM Chart also listed the "Unforgettable Five" - the top five from one year ago and from two years ago. 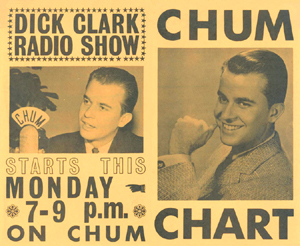 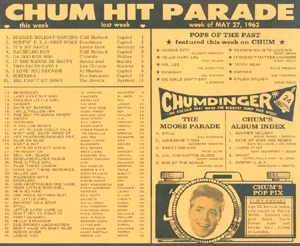 CHUM completely revamped the CHUM chart beginning with the issue dated May 27, 1963 - the sixth anniversary of the first chart. On the inside, the Top 50 was on the left (with the Top Ten in larger type). On the right, a list of "Pops of the Past" to be played that week on CHUM was listed, along with the "Chumdinger", the Moose Parade (now Top 5) and the Album Index, a look at the top five albums (reviving the album chart that disappeared in 1960). Also appearing for the first time was "CHUM Pop Pix", a short bio of a hit parade star complete with picture. The music note disappeared from the cover, leaving the layout department more flexibility with the cover.

The short-lived "Pops of the Past" feature disappeared December 9, 1963 with a listing of CHUMBUG contest numbers taking its place. If your CHUMBUG number appeared on the list, you won a prize.

The Moose Parade made its last appearance June 22, 1964 - replaced by a listing of "Hot New Hits."

On February 6, 1967 - just as the album rock era was approaching its peak - the Album Index disappeared and was replaced by a listing of hits from years gone by (five years ago, four years ago, etc.) Around this time, the CHUMBUG list was replaced by a "Chart Chuckle".

In August, 1968, the old on-air CHUM disappeared with the introduction of a modified Drake format. The station was never the same again, and neither was the CHUM chart. Beginning with the chart of August 9, the Top 50 was reduced to a Top 30, and list of five "Hot New Hits" was replaced by a list of five CHUM chargers. Also, the album chart returned with a top five listing. The front cover had a psychedelic look, usually with the picture of a deejay.

The first issue of the "new-look" CHUM chart was listed as "Collectors Issue #1". Later, they made the number coincide with the number of charts produced since the first one in 1957. However, as Ron Hall points out, they were five behind in the count and remained so until the final chart. 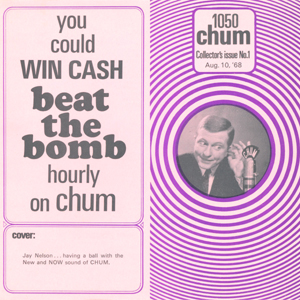 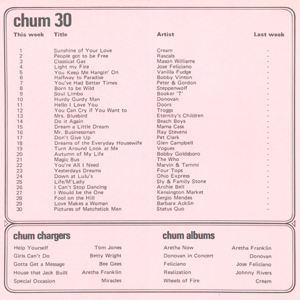 In the early '70s, CHUM added a top 10 album chart and also began a "Hitbound" feature (dropped by 1973). The album chart was expanded to Top 15 in 1974, reflecting the rise of albums in popularity.

The last CHUM Chart available as a "pocket" edition was the one dated April 26, 1975. After that, it appeared in the Toronto Star or the Toronto Sun until the last one June 7, 1986, when CHUM stopped playing top 40 music and started a "Favourites of Yesterday and Today" format. The chart prepared for June 14 - #1513 - was never published except in Ron Hall's CHUM Chart book. 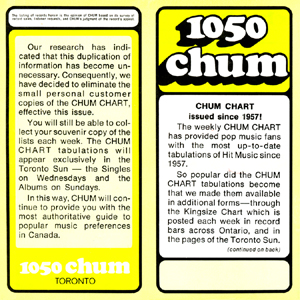 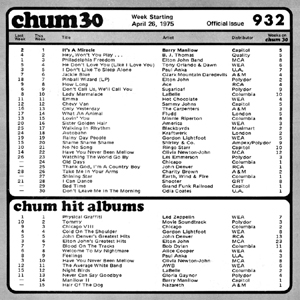 Ron Hall's first CHUM Chart book - a listing of every song to appear on the CHUM chart up to that plus other features - was published in 1983. A later edition, published in 1990, chronicles the entire history of the chart from 1957 to 1986. Yet another edition came out in 2007 as CHUM celebrated its 50th anniversary as a Top 40 station. It is the ultimate reference of North America's second-longest continually published music chart by a private radio station - the CHUM Chart. 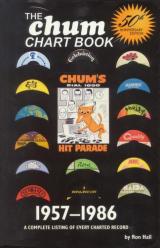