"Radio is not brain surgery, but it is heart surgery."

Christie got his start as a "go-fer" at 1470 CFOX in Montreal. He helped set up that station's remote for the John Lennon-Yoko Ono bed-in for peace at Montreal's Queen Elizabeth Hotel in 1969, and became a jock there under the name Jeff Douglas for $10 a shift, riding his bike to work. The McGill graduate would go on to jock at CFOX's Montreal rival CKGM in the mid-'70s, and later worked in Toronto at Mix 99.9 and Jack-FM. But most of his four-decade career has been spent in the west, with stops at CKXL Calgary, Kiss-FM and Jack-FM Vancouver and CHED/Power 92-FM, Magic 99 and his current home (as of 2013), Capital FM in Edmonton. He also jocked at CHER Sydney, Nova Scotia, and did a stint as CTV Vancouver's weekend weatherman.

Christie, whose cousin is former Edmonton Oiler star and later general manager Kevin Lowe, is a old-school personality jock who has connected with his listeners with his creative and off-the-wall approach. He has faked his own assassination on-air, put on a tutu and danced with the Alberta Ballet, and mastered the art of the prank call all without the help of consultants and focus groups. As Christie told Peter Goddard of the Toronto Star in 1997, "radio is not brain surgery, but it is heart surgery." 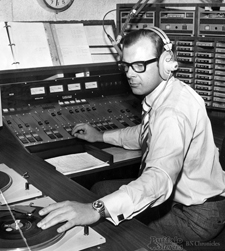 Frank Benny at the WGR controls

Frank Benny brought his wit and wisdom to radio audiences for more 40 years, about half of that time in Buffalo.

The man born Frank E. Biniak moved to Buffalo's WGR in 1966 after previous stops in Ridgecrest, California (KIKS), Portland, Oregon (KEX, KISN) and Cincinnati (WUBE). He stayed 19 years in the Queen City, mostly in afternoon drive, while also serving as the weatherman for WGR-TV and hosting Bowling For Dollars five nights a week (he also found time to do telethons and a movie matinee). He left WGR in 1985, did the morning show at WYRK for a year, then moved to WBEN AM & FM. Benny, an avid golfer, moved to Florida in 1989 where he worked at several stations including his last stop, WENG Sarasota, Florida, where he co-hosted the morning show.

"He would have liked to be remembered with a microphone in one hand and a golf club in the other," his companion Lynda Sawkes told Portland Radio Guide. "He was the master of the one-liner, he could fire them off as quickly as Johnny Carson."

Few stations have played hit music longer than CKOC. The Hamilton, Ontario, station was a Top 40 outlet for 34 years, from 1958 until 1992. CKOC then switched to oldies which meant they were still playing the hits, only now they were past hits rather than current ones.

One jock who was with CKOC for much of the Top 40 and oldies era was Dale Parker. Long-time CKOC program director Nevin Grant tells us more...

"(Dale) is a super guy and a true veteran of southern Ontario radio. CKOC was fortunate to garner Dale in the seventies from CKPT Peterborough ... also a Top 40 station in those days. Over his 17 years at CKOC, Dale did everything, from evenings to middays to drive to filling in on mornings. He was an active force in the programming, particularly the music of CKOC when the station moved to the oldies format in early 1992. Dale also worked at CKLH-FM (K-LITE FM) for several years and was involved in music programming there as well. Post-CKOC Dale worked for CKDO Oshawa and was the program director at CKPC Brantford. Dale has always had a passion for hockey and for several years has been the top administrator for amateur hockey in Brantford and environs."

Like many a television personality, Kevin O'Connell got his start in radio.

The long-time weather anchor at Buffalo's WGRZ-TV (Channel 2) was a Top 40 jock at WYSL in the '70s, moving to full-service WBEN later in the decade. O'Connell left WBEN in 1982, moving to Los Angeles television at KNBC, later to at KCBS. 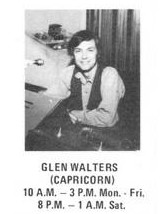 So how did Walters wind up in Thunder Bay, you ask? Contributor Tish Iceton tells Rock Radio Scrapbook...

"We worked together in Thunder Bay in the 80's. I arrived in July '81, Glenn shortly after. He had been working at KQDS in Duluth and was looking to get back to Ontario because his girlfriend could not work in the States. He got in touch with the GM at CJLB he knew from TO Ray Erickson. Ray was News Director at CKEY in the 70's. Ray was so over the top that he was bringing "The Big G" to Thunder Bay - you have no idea! Glen was hilarious to work with. I was doing afternoon's Glenn was mid-day. He had trouble operating and talking at the same time so that didn't last too long. They then had him doing swing, commercials and voice-tracking the all night show."

By the time he got to Thunder Bay, "Big G" Walters was just known on-air as Glenn Walters (he got the Big G nickname from General Foods, a sponsor of one of his early shows.)

Enjoy Glenn Walters as he lays down some CJLB voicetracks here.

Kudos to SOWNY's Craig Smith, who sent us both the aircheck and the pics! Thanks, Craig!

His first name and his nickname were one and the same.

Hagopian's stints at 1470-CFOX and CFGO are just part of a long radio career that has included stops at CJFM Montreal (where he did "The Solid Gold Show"), CKOY Ottawa, CKVN Vancouver, CKGB Timmins, Ontario (on-air and as PD), and CKMR Windsor, Ontario. He was also at CHUM Toronto briefly as a guest deejay in 1968.

Before he played the hits, Hagopian sang them as the lead singer for the Staccatos (later The Five Man Electrical Band) in 1963 and 1964. He's also an accomplished actor, having appeared in such films as Brainscan, A Killer Upstairs, A Woman Hunted, Visiting Hours and Jesus Of Montreal. Hagopian has also served as a representative/consultant for a network marketing company providing natural supplement health products.

Dick Biondi and Jack Armstrong weren't the only fast-talking jocks in Buffalo radio.

Shotgun Johnny Rock 'n' Roll Ringo, a.k.a. Bob Ditto, came to town about a decade after Armstrong's 1973 departure from WKBW and some two decades after Biondi left 'KB. The speedy-voiced deejay entertained in the 7 p.m.-midnight shift at WYNS for a year or so beginning in 1982. He was long gone by the time WYNS became WHTT in 1986. Thanks to Bill Dulmage for this information.