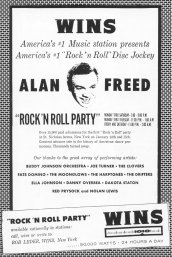 Much has been written and said about Alan Freed, the pioneering deejay known as The King of The Moondoggers. But here's a few interesting tidbits about Freed that you may not be aware of:

- He was originally a classical music announcer, and was quite knowledgeable about that genre of music.

- Freed was a tee-jay (we now call them vee-jays) at WXEL-TV in Cleveland for a short time in the late '40s.

- He played trombone, and once had his own band, the Sultans of Swing.

- At one time, his syndicated show was heard on Radio Luxembourg.

- Late in his career, Freed did an all-night jazz show at KNOB in Los Angeles.

- His middle name was James.

- He had three children, Lance, Al, Junior, and Alana.

- He was married three times.

- He once applied for a job at CBS but they told him to "find a better profession."