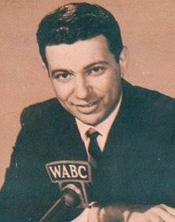 Dan Ingram got his start at WABC in 1961 - incoming from WIL St. Louis - after having previously jocked at smaller stations in the New York area.

Most of Ingram's tenure at WABC was spent in afternoon drive, where he entertained millions during his two-decade stay at the legendary Top 40 outlet.

He didn't identify himself in his first two shows, instead calling himself "Not Chuck Dunaway" after the host who preceded him in the afternoon drive slot.

On this early WABC show he uses the air name that would become quite familiar to New York audiences over the next four decades.