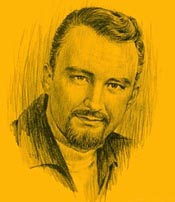 The ID said "Ladies and Gentlemen, The Beat Goes On," but Frank Terry had no trouble keeping the beat.

Terry, an original Boss Jock at the Drake-formatted station, was a drummer before his KHJ days (he once drummed for 87 hours non-stop as part of a radio promotion). The native of Rapid City, South Dakota, also jocked on California stations  KMEN San Bernardino and KMAK Fresno before arriving at KHJ in 1965 for a three-year stay.

Terry moved to KFI Los Angeles in 1969 before beginning a long career in San Francisco radio, that included stops at KFRC, KSFX-FM, KNEW and KSAN. The man born Terrance Francis Crilly later moved to KFGY Santa Rosa, California, where he jocked from 1998-99.