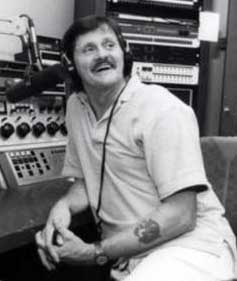 Gary Burbank did the 'CK morning show from 1974 to 1976, following in the footsteps of Dave Shafer, Chuck Morgan, Charlie Van Dyke and Big Jim Edwards. Bill Winters, Frank Brodie and Shafer (again) also did mornings at the Big 8 before Burbank arrived. Burbank would be succeeded by Tom Shannon and Dick Purtan among others in 'CK morning drive but not before providing some memorable Big 8 moments.

Burbank brought an impressive arsenal of outrageous satirical humour and off-beat characters to his shows. Perhaps his most famous character was Earl Pitts Uhmerikun, a redneck spouting daily commentaries on just about everything. Burbank developed this and other characters during a four-decade career that  included time at WAKY and WHAS Louisville, Kentucky, WNOE New Orleans, and a 26-year run at WLW Cincinnati that ended with his retirement in 2007.

The man born Bill Purser started in radio in the mid-'60s in his hometown of Memphis at WMPS. He used the air name Johnny Apollo then, changing it to Gary Burbank after arriving at WAKY in 1968. The name Burbank was inspired by Gary Owens, the Los Angeles radio legend who would say he was broadcasting from "beautiful downtown Burbank" during the TV show Rowan and Martin's Laugh-In.

On this aircheck, you'll hear both Byron MacGregor with the news and the lady he would marry two years later, Jo Jo Shutty, the first female traffic reporter in North America. MacGregor died January 3, 1995 of pneumonia. He was 46.

Gary Burbank was admitted to the Radio Hall of Fame in 2012.


More from The CKLW Years here!