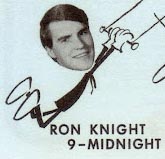 Ron Knight jocked at WING Dayton under program director Bob Holiday, before both moved to KTKT. Later Knight would be found in the Detroit market (as Sean Conrad) at WKNR Dearborn, before heading west to KSLX-FM San Francisco (not to be confused with the Ron Knight at CHUM and CFGM in the Toronto market). Oddly enough, Knight's competition at rival KIKX was Dino Day.

KTKT went on the air in 1949, and seven years later started programming Top 40 music. It quickly became Tucson's #1 station, a status it maintained until the early '80s. With listenership declining, KTKT dropped Top 40 in late 1985.