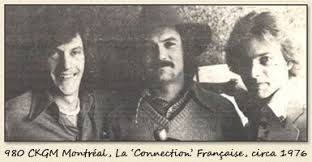 The climb to number-one was short and sweet for CKGM in the early 1970s.

CKGM signed on December 7, 1959 and was a hit music station in the 1960s. But things really took off for the Montréal station after it revamped its format January 1, 1970. By December of that year CKGM had overtaken rival 1470-CFOX to become the number-one rocker in Montréal. It would hold that position until December 1979, when it was overtaken by sister station CHOM-FM.