AIRCHECK OF THE WEEK
* EXTRA * 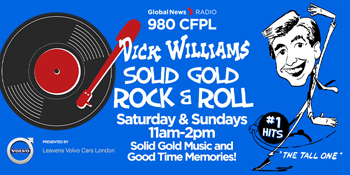 Sixty years after he started at CFPL, Dick Williams returned to the station that helped make him a London radio legend.

Williams, who jocked at CFPL from 1961 to 1967 as part of a lengthy career spent mostly in the Forest City, made his comeback with a new show, "Dick Williams Solid Gold Rock and Roll", a three-hour program focusing on the hits of the '60s and '70s.

The three-hour show features plenty of classic jingles from the '60s, a good sample of Williams' trademark humour, and several audio bits from The Tall One's archives. It's a winner, just like Dick Williams himself.