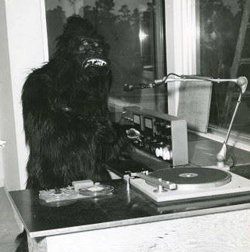 The WAPE Ape spins the hits

WAPE broadcast the hits of the day for over 20 years, ending in 1980, and you would hear it up-and-down Jacksonville's beaches in the '60s and '70s. Actor Jay Thomas got his professional radio start there. Other big bananas at "The Big Ape" included The Greaseman (Doug Tracht) and "Teddy Bear" Ted Richards of CKLW fame.

Another major talent at WAPE was the subject of this aircheck, Dino Summerlin. He later became general manager of country-formatted WWNC Asheville, North Carolina, under his real name, Sheldon Summerlin. He died of heart failure in 1986.

Unique to WAPE was the "ape call." On a station otherwise devoid of any bells and whistles, the ape call roared mightily as virtually the only formatic ever heard on The Mighty 690. The call itself came from the 1961 song "Ape Call" by Nervous Norvis. The voice on the ape call on the record is that of California radio veteran Red Blanchard.

This aircheck is a composite of two airchecks circa 1963-64.

Enjoy this composite of Dino Summerlin on WAPE from 1963-64 (UNSCOPED) here.

Enjoy this composite of Dino Summerlin on WAPE from 1963-64 (SCOPED) here.