Bob Laine is CHUM's best-remembered all-night man. But a few other folks, some well-known and some not-so well-known, also did the midnight-to-dawn shift over the years.

When CHUM debuted as a Top 40 station on May 27, 1957, the midnight-to-6 a.m. shift was held by Hank Noble, but not for long. About eight months later - in January of 1958 - Noble was replaced by Jay Jackson. Jackson didn't last much longer than Noble, leaving in mid-year to make way for Laine. Except for a departure of a few months in 1962 while he did mornings at CFGM, Laine owned the all-night slot for a decade. He finally moved to middays in August of 1968. Laine's replacement: "The Prez" Brian Skinner, who had been the station's zany evening personality from 1965 to 1968. 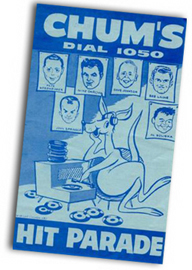 CHUM all-night hosts in the '90s included Kori Skinner, Andy K., Roger Kelly, Jack Dennis and Doug Kirkwood. By 2000, Bruce Marshall was voice-tracking the overnight show. CHUM switched to a sports-talk format as The Team in May, 2001, and ran syndicated talk overnight. When CHUM returned to music in August, 2002, the all-night shift was unfilled, they just played music - no jock, though Roger Ashby's son Regan Ashby sometimes filled in.


More from the CHUM Archives here!