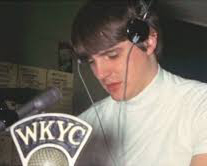 For a time, one of Top 40 radio's greatest jocks couldn't use his own air name.

In January, 1967, Jack Armstrong started at WKYC after breaking his contract at Cleveland rival WIXY. Because of the contract breach, Armstrong was not allowed to call himself Jack Armstrong on-air at WKYC, so he used "Big Jack" instead, later using "Jack W. Armstrong."

WKYC was one of some two dozen North American stations Armstrong jocked at starting with WCHL in Chapel Hill, North Carolina, in 1960 at the age of 14. His last radio gig - at WWKB Buffalo, New York - ended in 2006.