He meant that in more ways than one.

Field became a leading DJ and voice-over artist despite spending most of his life in full-metal braces, having contracted polio at the age of four. He started in radio in Miami, then moved to KLIF Dallas, KTSA San Antonio and KILT Houston before arriving at "Color Radio" KFWB in 1958. Field was there for the entirety of that station's music format.

But Field was more than a jock. He was also of North America's leading voice-over artists, depicting voice roles on "The Flintstones", "Hawaii 5-0" and "Dragnet", and doing commercials for Hawaiian Punch, Western Airlines, Mobil Oil and many others.

After KFWB, Field went to the Motor City to become general manager of WJR. In 1969 he founded KPSI Palm Springs and was also its morning man for 11 years. He also stepped into politics, twice being elected to Palm Springs City Council and twice serving as mayor pro tem.

With the rest of the original "Seven Swinging Gentlemen" having passed, Field in 2014 authored a book called "The Last of the Seven Swingin' Gentlemen", which can be found on Amazon. 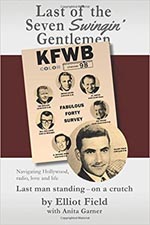