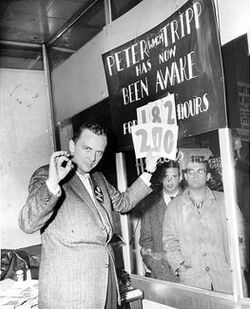 It was a stunt gone bad, very bad.

In January 1959, WMGM DJ Peter Tripp attempted a world record of eight days and nights (201 hours and 10 minutes) without sleep for charity. He broadcast three hours a day from a glass booth in Times Square, his progress monitored by doctors.

Tripp reached his goal, but at great personal cost. He began experiencing hallucinations by the fourth day of the wake-a-thon, imaging spiders in his shoes and mice at his feet. By the eighth and final day, he was unable to differentiate between hallucinations and reality, and thought his doctors were conspiring against him. He was carried to bed after ending his wake-a-thon and slept for more than half a day.

Tripp resumed his radio job at WMGM but continued to have psychotic events on the air. He lost his job, divorced his wife (his first of four divorces) and got caught up in the payola scandal after it was discovered he had accepted $36,500 in bribes to play certain records. He received a six-month suspended sentence and a $500 fine.

Left almost penniless after departing WMGM in 1960, Tripp eventually resurfaced at KYA San Francisco. He then moved down the coast to KGFJ Los Angeles before his final radio stop at WOHO Toledo. He left radio in 1967, then did motivational speaking, sales, marketing, writing and stock-brokering before retiring to Palm Springs, California. The native of Port Chester, New York, died of a stroke in 2000, aged 73.

Tripp began his radio career in 1947 at WEXL Royal Oak, Michigan. He moved to KUDL Kansas City in 1953, before moving cross-town to WHB. He landed at WMGM in 1955 where he did his show "Your Hits of The Week."

This aircheck was recorded about a year after his stunt.