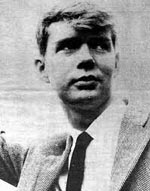 Dick Heatherton was born to be an entertainer.

Son of big band leader Ray Heatherton, and brother of singer/actress Joey Heatherton, "Happy Dick" was only 23 when he arrived at WPOP. He had previously done gigs at WBIC and WGLI on Long Island. His initiation at WPOP included two weeks co-hosting the morning show with Woody Roberts. That was followed by a 40-hour, seven-minute on-air marathon during which the other WPOP Good Guys were supposedly kidnapped.

Heatherton is also an author and motivational speaker, and has served as VP, General Manager, Regional Manager, Program Director and Marketing Director at CBS, Westwood One, Salem Communications and Entercom.