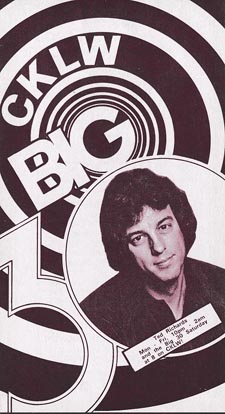 There's a stack - or more accurately a "stacking" - of Canadian content in this late '70s CKLW aircheck.

Heart, The Band, Baron Longfellow, Willie D. Smith, Dan Hill, Patsy Gallant, Pagliaro and Anne Murray are among those heard on this portion of the Ted Richards late-night show which features 100 per cent Canadian content.

"Stacking" Can-Con during an off-time was a common practice at the time, as it freed up programmers to play non-Canadian tunes during the prime hours. However, the Canadian Radio-Television Commission (Canada's version of the FCC) has since closed this loophole. Today's programmers are expected to spread out the Can-Con evenly throughout the broadcast day.