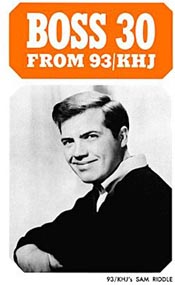 Sam Riddle went from being a star to making stars.

The Fort Worth native earned a historic place in Top 40 radio by being one of the original "Boss Jocks" on KHJ in 1965. Riddle, who had previously jocked in L.A. at KFWB and KRLA, spent five years at KHJ before departing in 1970 (he returned to the Big 93 in 1974).

Riddle, who previously hosted L.A. TV music shows in the '60s like

9th Street West and Hollywood A Go Go, made a major splash from 1983 to 1995 as producer of Star Search Starring Ed McMahon, a forerunner of American Idol. The show gave career breaks to artists like Britney Spears, Justin Timberlake, Usher, Dave Chappelle and Christine Aguilera. Riddle also produced shows like The Songwriters Hall of Fame Special, Supermodel of the World, You Write the Songs, It's Showtime at The Apollo and Livin' Large. He acted in Green Acres, Burkes Law and the Elvis movie Clambake.