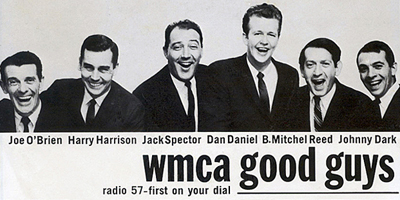 Two of WMCA's most popular jocks worked at opposite ends of the clock.

Joe O'Brien arrived at WMCA at the dawn of the Big Band era in 1935 and left during the Age of Aquarius in 1969. O'Brien went to WNBC after his depature from 'MCA and in 1972 became the first voice on WHUD-FM in Peekskill, New York. O'Brien spent 14 years as morning man there, then workedd as a part-time as a part-timer until 2000. He died in a car accident in 2005, a week after his 90th birthday.

B. Mitchel Reed came to WMCA in 1963 from KFWB Los Angeles, where he was known as "The Fastest Tongue in the West." BMR spent two magnificent years at WMCA before heading back west to KFWB. The one-time fast-talking jock became a slow-talking "progressive" jock on FM in the years to come. He died in 1983 of heart problems at the age of 56.