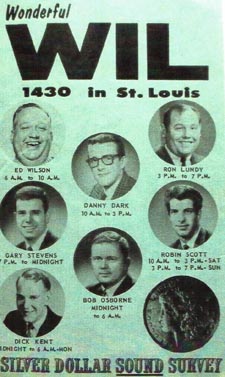 For a while, there was a one-way shuttle going from WIL St. Louis to WABC New York.

Dan Ingram was the first to go east. He joined the WIL staff in 1960 before heading to the Big Apple the following year to begin a 21-year stay at Musicradio.

Ingram - in his role as program director - brought Ron Lundy into the WIL fold in 1960. Five years later, Ingram was reunited with Lundy at WABC. They remained co-workers and the best of friends for decades, co-hosting the final Musicradio show on May 10, 1982 and later reuniting at WCBS-FM.

Dayton came aboard WIL as Robin Scott in 1960. He jumped to WABC in 1963, leaving that station two years later for points west. He returned to New York at WPIX and WCBS-FM in the '70s.