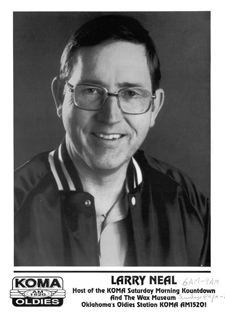 KOMA's story as a Top 40 station began in 1958, when legendary programmer Todd Storz bought the 50,000-watt monster and turned it into a hit parade station. Storz, whose earlier projects included WHB Kansas City and WQAM Miami (the station CHUM was modelled after), fought cross-town rival WKY for Top 40 supremacy in Oklahoma City for years.

In 1974, KOMA symbolically surpassed WKY when it was named Billboard Station of the Year (Storz didn't live to see it - he died 10 years earlier). Helping KOMA was its massive night-time signal, heard all over the western U.S. as far away as Los Angeles. Such was its reach that American soldiers in Vietnam listened via the skywave to get a taste of home.

For years, one of the attractions of KOMA's oldies format were two shows hosted by Larry Neal, "The KOMA Saturday Morning Countdown" and "The Wax Museum" on Sunday nights. Neal did the Wax Museum for 15 years - 1988 to 2003 - and only once missed a show.