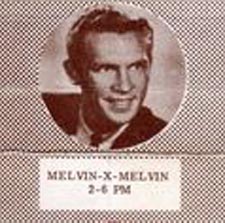 It was once common practice for stations to use "house names" for their jocks.

Several different announcers did the night-time shift as "Jack The Bellboy" at Detroit's WXYZ. Buffalo station WNIA had house names such as "Mike Melody", "Tom Thomas" and "Jerry Jack" (it saved the cost of getting a new DJ jingle if anyone left).

This practice was also used at WMEX. There was "Fenway" and "Melvin" or "Melvin X. Melvin" to name a couple.