Broadcasters have a tendency to move around quite a bit, but not all. Some have the good fortune to spend most of their careers at the same station. A good example is Gary Summers of CKOC.

Summers was at CKOC as a deejay in the early '60s and still there as sports director in the early '90s. In between, he established himself as one of Southern Ontario's most popular and enduring radio personalities. When CKOC celebrated its 75th anniversary in 1997, his reunion appearance on the morning show was both informative and emotional to his many fans.

It was a teen dream, and every competitor's nightmare.

KIMN was the station practically everyone - especially teenagers - listened to from the late '50s to the early '70s in Denver. Everything was aimed at the younger audience, from the music - rock & roll of course - to outlandish promotions and crazy jocks doing outlandish promotions. There was Pogo Poge broadcasting from a snake pit (and getting bit!), Roy "The Bellboy" Gunderson jumping on a trampoline while doing his show, and Steve Kelly sitting in every seat in Mile High City or visiting every phone booth in the city (probably a lot easier to do now, in the cell-phone era!). All of it was supplemented by brash newscasts emphasizing the sensational which not only appealed to the kids, it got their parents listening too. It was loud and proud and it worked, to the tune of a 56 share at its peak. 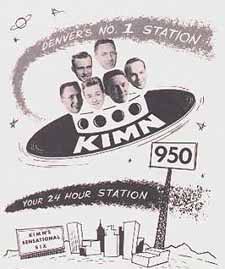 Glen "Boogie" Bell was among the jocks who made KIMN tick. He jocked at the station from 1958 to 1963 and his show is typical of the sound of the station that flourished under the ownership of Ken Palmer, who bought KIMN in 1960 and sold it 10 years later. A shy but likeable man, Palmer was the one who helped make KIMN respectable for advertisers. "He played rock and roll, but he believed a radio station should be a servant to the community," recalls former KIMN traffic reporter Don Martin. "When we started a 15-minute daily newscast on a rock & roll radio station, everybody said 'you're gonna get killed.' We made it No. 1." 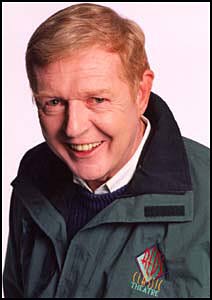 Red Robinson helped pioneer rock 'n' roll radio in Canada from the very dawn of the genre in the 1950s. His legend grew over the years in stints at Vancouver stations like CFUN, CJOR, CKWX and CISL, and Portland's KGW. During his 50-plus years in the business, he has appeared with virtually all of the great music stars of the '50s and '60s, including Elvis Presley, the Beatles, Ray Charles, Roy Orbison and Fats Domino. Robinson was elected to the Canadian Broadcast Hall of Fame in 1997.

Robinson's final weekday morning show was November 7, 2000 on CISL. But we remember another finale from 38 years earlier on CFUN. 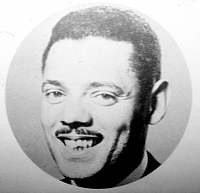 Lucky Cordell is remembered as one of the top R&B deejays of the ’50s and ’60s, and as a groundbreaking radio executive. But the man known as the Baron of Bounce also made another indelible contribution, as a long-time leader of Chicago’s African-American community.

Born in 1928 in Granada, Mississippi, Moses Lindberg "Lucky" Cordell served in the U.S. Army during the Second World War before starting his radio career. Legendary jock Al Benson hired him at WGES in 1952. Later in the decade, Cordell jocked at WGRY in Gary, Indiana, where he hosted the immensely popular House of Hits program. While at WGRY, he was unanimously voted Honorary Mayor of the Negro Community in a poll of local newspapers.

Cordell worked at several stations in the Chicago area - including WGES - before landing at WVON (Voice of the Negro) at the birth of that legendary station in 1963. Cordell became WVON program and music director in 1965, was promoted to assistant general manager in 1968 and became general manager in 1970. Under his direction, WVON increased its ratings and almost doubled its advertising income, while becoming one of the most influential stations in U.S. history.

Cordell joined the Chicago Urban League in the late ’60s and has remained an active member of Chicago’s African-American community for years.

He didn't have the smooth baritone voice. His delivery needed work, definitely. But Pallie Pascoe was absolutely beloved by his listeners at CHAB Moose Jaw, Saskatchewan, in the early '60s. His sportscasts and this well-circulated aircheck in particular are the stuff of legend.

Listening to this slice of 1962 radio will take you back to a simpler time when the medium was a little more homespun, a little less predictable.

Ed McKenzie was the first "Jack the Bellboy", bringing the nom de plume to WJBK Detroit in 1945 a few months after the Second World War. However, WJBK went to court to retain the name when McKenzie left for WXYZ in 1952. After that a parade of personalities wore the Bellboy's cap at WJBK, including Tom Clay, Harvey Kaye, Dave Shafer, Terry Knight and Robin Walker. For years the Bellboys occupied the 7 p.m.-midnight shift at WJBK (these were the days when "house" names were popular in radio) though when McKenzie introduced the Bellboy in the 1940s it was a late afternoon shift.

WJBK became Detroit's first full-time Top 40 station in 1956. They also produced the Motor City's first weekly printed survey of the big hits of the day, called "Formula 45." But when WKNR launched its rock 'n' roll format in 1963 to rave reviews, the competition proved to be too much for WJBK. It dropped Top 40 in 1964 for an easy-listening format and, after nearly two decades, the Bellboy played his last record.

"Bill has many imitators, but no rivals." So gushed Time in the 1970s. The subject of the piece was Bill Ballance, one of southern California's most popular announcers.

Much of Ballance's reputation was gained during his years at KFWB from 1955 to 1965. He held down the evening shift during many of those years and in 1958 became one of the original Swingin' Seven Gentlemen when Chuck Blore and KFWB introduced the ground-breaking Colour Radio format.

Ballance was a great communicator, a reputation enhanced later in his career by his controversial talk show Feminine Forum. That early 1970s show is considered to be the forerunner of the "shock talk" genre later made popular by hosts like Tom Leykis and Howard Stern. All told, his radio career spanned four decades, with stops at KNX, KFWB, KGH, KGBS, KABC and KWIZ Los Angeles, KOA Denver, KNBR San Francisco, KFMB San Diego and Honolulu stations KHVH and KGMB.