No one stood taller in London radio than The Tall One.

Dick Williams spent nearly half a century on the air in the Forest City, beginning in 1961 at CFPL. Williams was only 16 years old when he started his radio career in 1956 as program host at CKCR in Kitchener, Ontario. He moved to WSAI Cincinnati in 1958, and also jocked at KDEO San Diego and KROY Sacramento, California, before bringing his quick wit and masterful sense of timing to CFPL. A natural entertainer, Williams also did a dance show at CFPL-TV called Dick Williams Wing Ding that featured live performances and appearances by the other CFPL ``Lively Guys.``

Williams left CFPL in 1969, and later jocked on London stations CJBK, Q 97.5 (CIQM) and Oldies 1410 (CKSL). He left full-time radio in 2006 to concentrate on voice work at dickwilliamsvoice.com.

Enjoy Dick "The Tall One" Williams on CFPL here.

Brian Skinner came over to CHUM from cross-town rival CKEY as a swing shift deejay in 1961. The Prez was promoted to full-time duty when he replaced Dave Johnson in the 7-10 p.m. shift in the fall of 1965. Johnson had been doing the evening shift since the station's Top 40 beginnings in 1957 so Skinner had big shoes to fill. But CHUM listeners weren't disappointed as Skinner combining his cornball sense of humour with a cacophony of bells, whistles and tambourines to create an unforgettable listening experience. Nothing was too zany for Skinner, who brought real-life CHUM janitor Jerry Kowalski onto the air to tell corny jokes in his broken Polish accent.

The fun lasted until 1968, when CHUM tightened up its programming and Skinner was relegated to the all-night show. The Prez did his last CHUM show July 15, 1969 and later went into teaching in Seattle.

Johnny Williams (not to be confused with the KHJ jock of the same name) was a Michigan radio mainstay. He spent many years at CKLW and also appeared on WNIC-FM (his nightly "Pillow Talk" show was the number-one rated night-time show six years in a row.)

He has also served as Program Director of "The Heart,", the love channel station on XM Satellite Radio, and has been an imaging voice for XM's 50's Channel, Kids Channel, Radio Classics and Vox Channels.

More of the Big 8 at The CKLW Years 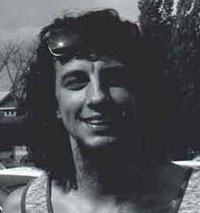 Hound Dog Lorenz ... Wolfman Jack ... Charlie Tuna ... Top 40 radio was full of great nicknames in its glory days. And many of those nom de plumes had to do with animals, fish and fowl.

There was another "Bear" - Ted "Teddy Bear" Richards. Enjoy him on CKLW (UNSCOPED) here.

There was another "Bear" - Ted "Teddy Bear" Richards. Enjoy him on CKLW (SCOPED) here.

Ever wonder how radio stations get their call letters?

The story behind CJBK's calls is an interesting one indeed. It starts in 1967, when CJOE went on the air at 1290kc. They took over the frequency vacated by CKSL, which moved to 1410 in 1964. CJOE began airing rock music from 7 p.m.-midnight in 1970, and by 1971 was rock all day and night. Rick Richardson purchased CJOE in 1972 and decided to change the call letters. Bill Dulmage of the Canadian Communications Foundation tells Rock Radio Scrapbook the story behind that.

"On September 6 at 12:00 a.m., "The Big Switch" took place in conjunction with the opening of the Western Fair ... CJOE became CJBK. Why CJBK? Richardson wanted call letters that began with "CJ" to differentiate the station as much as possible from competitors CFPL and CKSL. Otherwise, the call letters did not have any specific meaning. Some however believe that Mr. Richardson was a fan of WJBK-AM Detroit when he was working at a Windsor radio station. As a result, he might have chosen the "JBK" from WJBK for CJBK."

And that's how CJBK came to be! 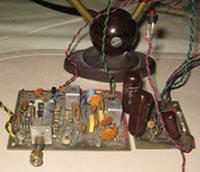 It's one thing to hear the aircheck.

It's another to hear the story behind the aircheck.

Charlie Ritenburg tells us "the rest of the story" behind this classic 'check.

"These pictures (above) are the two radios that I listened to WGCL (G-98) Cleveland from London Ontario with. I first heard G-98 on the Sony clock radio in early 1974 after discovering the existence of WDRQ-FM Detroit only days before while travelling close to the Motor City.

The "circuit board" radio was a high school project that also received G-98 along with "Rock 102" from Buffalo and many other FM stations from Cleveland, Detroit, Kitchener, Hamilton, Buffalo and occasionally Toronto in stereo. This was the receiver which the G-98 air check from 1974 was recorded from onto a medium quality, non dolbilized cassette deck with a low bias "Audio Magnetics" brand tape.

Both radios were connected to the "rabbit ears" TV antenna that are shown with the "circuit board" radio to receive these distant signals. I still use these very same rabbit ears today with my home sound system in Richmond Hill and the Sony clock radio is still working and waking me up from my night table after nearly 38 years of reliable operation."

CHAB rose from the ashes of one of Canada's first non-commercial radio stations.

Lack of financial support led to 10AB's demise on November 11, 1933, as the station signed off with Rudy Vallee's "I'm Heading to the Last Round-up." But five weeks later, on December 17, 10AM returned to the air as a commercial station, CHAB, and the station grew from there. One of its first major hires was Elwood Glover, who left in 1938 for a storied career at the CBC. It later became a Top 40 station, as we hear in this mid-'70s aircheck of "Big Jim" at CHAB.

Just who was "Big Jim?" After this aircheck was posted we got an e-mail from a viewer saying that he was pretty sure "Big Jim" was Jim Ripley, a.k.a. the Bionic Ripley. He later went to CKY in Winnipeg before moving to C-JAY and CKIK in Calgary. Ripley also hosted "Home Cookin'", a TV show on CFCN-TV Calgary simulcast on C-JAY which also featured local acts.

I first discovered 96X-FM in Canada of all places! After a heavy afternoon rain storm in late June of 1976, a few friends and I were in my car in a field outside of London Ontario dialing around the FM band on my under dash "Roberts" FM-cassette car stereo. Next to London's 179,000 watt FM96 on 95.9 MHz (CFPL-FM) was a station booming in that was playing "Ball Room Blitz" by Sweet. Then a few commercials ran that mentioned numbered street names like New York City has. Once the music was back, a high energy jock introduced "Oh What A Night (Dec '63)" by the 4 Seasons with the call letters WMJX. The signal was very strong but intermittently switched in and out and eventually disappeared altogether. A few months later I explained this freak reception to Pat Riley, a CHUM DJ who used to work at the 100,000 watt 96X. From that point I knew that this phantom signal had actually come from Miami Florida which was over 1500 miles to the South of me! Truly amazing, especially on the FM band!

Knowing this, I had a friend (Brian Pietrzyk) record some 96X air checks when he traveled to Florida in December of 1977. But in May of 1978, Brian and I returned to Hollywood Florida where I had the chance to record my own stereo air checks of 96X on my Toshiba reel to reel machine. At the time he had a Pioneer KP-500 car stereo with the FM Super Tuner so we used that with a power supply to record a great sounding signal on 96.3 MHz in our trailer. I recorded a reel of Y100 along with a number of other South Florida stations but WMJX was my main focus after that most amazing day when it made the long haul to London Ontario Canada!

Tom Kent was a high energy disc jockey who worked at many great radio stations like WHBQ Memphis, WIXY & WGCL Cleveland, WMJX Miami, KLIF Dallas, WLS Chicago, WAVA Washington and later became the program director of WBZZ Pittsburgh. He also hosted many syndicated radio shows and started out like I did with his very own pirate radio station. You can appreciate the energy and excitement.

You've heard of ideas that were ahead of their time?

This idea was behind its time.

AM stereo was thought to be the saviour of AM radio in Canada and the U.S. when it came out in the '80s. Many stations adopted one of the four technologies - C-QUAM, Harris Corporation, Magnavox and the Kahn-Hazeltine System. But there were a multitude of problems. First, the competing technologies proved to be a problem as it confused consumers. Also, AM stereo was adopted too late as many listeners had moved to FM and weren't about to come back to AM, which was moving into news-talk sports programming anyway. Interest in the technology faded and by the early 2000s hardly any stations were using it. What started out with so much promise was a forgotten relic.

One of the Canadian stations to use the C-QUAM system - which became the standard in Canada - was CJME. The Regina station went on the air in 1959 with an easy-listening format, however it soon went Top 40. By the '90s they were an oldies outlet. The music died for CJME at midnight on September 7, 1998, when the station played its final song - "American Pie" by Don McLean. The next day they went to a news-talk format.