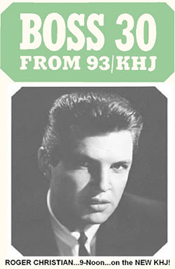 Roger Christian broke into radio by saving a life.

The native of Buffalo, New York, got his first radio gig after rescuing a radio executive's wife from drowning, while working as a lifeguard.

The station was WSAY Rochester, New York, and before long Christian had moved west to Buffalo and WWOL. But Christian would soon find fame and fortune much further west.

Christian - not to be confused with the Roger Christian who spent 43 years at 102.5 FM in Buffalo - moved to California in 1959 for a gig at KFXM San Bernardino. From there, it was on to Los Angeles where - after stops at KRLA and KFWB - Christian landed at KHJ Los Angeles where he was one of the original "Boss Jocks. Around this time, he co-wrote “The Little Old Lady (From Pasadena)” for Jan & Dean and “Don’t Worry Baby” and “Little Deuce Coupe” for the Beach Boys. He also appeared in 17 movies, including "The Carpetbaggers."

Christian - who also jocked in Los Angeles at KBLA and KIQQ-FM and a few others (some more than once) - retired from radio in the mid-'70s. He died in 1991 of complications from kidney and liver failure. He was 57.