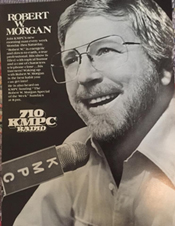 From Boss Jock to Boss Talker.

Lots of folks were surprised when Robert W. Morgan moved to a weekend split-shift at KMPC in 1975. After all, the native of Marion, Ohio, had spent the latter half of the '60s and early '70s as the highly-rated morning man at Los Angeles rival KHJ. But there was a method to his madness - four years later he succeeded 30-year KMPC legend Dick Whittinghill in the morning show. Morgan would stay six years at KMPC, surviving and actually flourishing in that station's transition to talk in the early '80s.