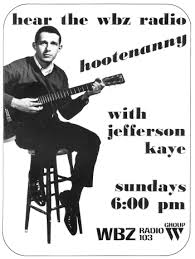 Before he came to WKBW, Jefferson Kaye literally had a hootenanny at WBZ.

The man born Martin Krimski, who started his broadcasting career in the late '50s at Providence, Rhode Island stations WHIM and WRIB, broke into the big time in 1961 at WBZ Boston. He started on the all-night show, then moved to afternoon drive as the station transitioned from a middle-of-the-road to a Top 40 format. He also hosted a Sunday night program called Hootenanny, which showcased folk music.

This aircheck was recorded shortly before Kaye left for WKBW. It's a great capture of WBZ's Top 40 format and contains lots of songs that you probably haven't heard since they came out, and some that you may have never heard.

Also on this aircheck: a full newscast with long-time WBZ newsman Streeter Stuart.