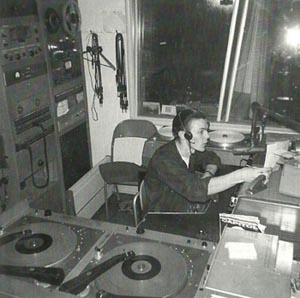 We asked Roy Geldart about his broadcasting career and he wrote this wonderful summary...

"I knew about the "magic" of radio" at an early age; and, by the late '50s - in my early teens, I was caught up listening to the many rock n roll stations which would boom at night into my small town of Sussex, New Brunswick.

It was the Golden Age of Rock Radio and I was exposed to the great east coast US stations of WABC, WINS, WMGM, WBZ, WMEX, WDRC, WPOP, WPTR, WKBW.

I was involved in BCB DXing during my teens and was constantly dial-twisting listening to what the jocks had to say more than the music.
About that time, I firmly believed that I wanted to pursue a career on-air.

At the time, there was no radio station in my town, but whenever I was in a town or city that had a station, I would visit it and ask to watch the on-air people.

After graduating from high school, I borrowed a Webcor reel-to-reel and with some picked-up BN copy made audition tapes to small stations around the Maritimes.

One application was successful..... in the beginning of 1964, the CBC was opening a station in Fredericton, NB, and needed a person to temporarily (for 6 months) to set up the record library.

That led to me getting a summer-relief announcer job on CBZ and its repeater CBD, Saint John.

That job was over in the fall of '64 and I landed at CKBW, Bridgewater, NS as an announcer thru to September '65.

I found that shift wasn't good for social life.... so, when an opening on the (1-6 a.m. all-night country/rock) show, opened, I took it for two years before switching to news reporting in 1967.

In 1970 I moved to CFBC News Saint John and was promoted from reporter to Assistant News Director and ND.
In 1973, I went to ND at CKCW Moncton.

From 2002 - 2004, I did volunteer weekend morning drive dj (oldies rock & country) at CFMH (the the UNB-SJ lp FM) and even did a short p.m. drive stint at CFHA (lp FM) Saint John (Canada's first comedy station).

I Moved to Campbell River, BC, in 2004 and have been enjoying Vancouver Island Wx and lifestyle ever since.

My love of radio still exists; but, my on-air activity is limited to the ham bands as I've been an Amateur Operator since 1990, holding the calls VE9DXR (NB) and VE7DXU (BC).

Although I miss being on 'the really radio', I don't think today's PDs (with their non-stop computerized music, few-if-any jocks, and disemboweled voice liners) are ready for my style. ('style' which I thoroughly  got away with while doing my "Dog's Breakfast" show at the low-power UNB station).... some of the best fun I ever had with clothes on."