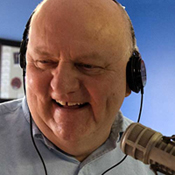 From Vancouver in the west to Maine in the east - and many points in return - Scott Miller has been everywhere.

It all started at CKNR Eliot Lake, Ontario, where he jocked in 1974-75. This greatly-talented jock soon moved on to bigger fish - CJME Regina, CJAB Moose Jaw, CKOM Saskatoon - before arriving at CFTR in 1979. That same year Miller moved to CKLW for an 11-year stint, the first five on the AM side then over to FM.

After 'CK, Scott Miller went to WKSG Mount Clemens/Detroit for a brief stop in 1990, then over to WOMC Detroit for a brief stay. Then a nine-year stay at WJMK-FM Chicago starting in 1992. In 2001 Miller went to WGRV-FM Detroit which during its time there changed calls to WMGC-FM. The rest of the decade was spent at WSRZ-FM Sarasota, Florida, WRLL Chicago (voicetracked from Sarasota), WRVR (The River) Memphis, and CKCL Vancouver. He was then at WOLX-FM Madison, Wisconsin, and voicetracked WKTK-FM Gainesville-Ocala, Florida.

Miller has been at WQCB Bangor, Maine, the past six-and-a-half years.