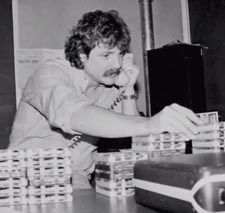 After nearly two decades of jocking mostly in the east, Jack Armstrong finally arrived on the west coast in 1978.

His first west coast stop was KTNQ, which became KHTZ in 1979. Then it was on to KFI, then KKHR Los Angeles with KFRC San Francisco sandwiched in between. KBOS Fresno, California, was Armstrong's last west coast stop in 1988, before he headed east to WMQX in his home state of Greensboro, North Carolina.