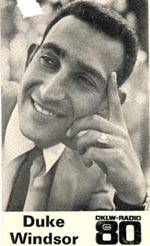 To a generation of Clevelanders, Larry Morrow was that city's morning mayor, so popular that the REAL mayor named him Mr. Cleveland. But to CKLW listeners, he'll forever be remembered as Duke Windsor, the aptly-named night-time deejay from the pre-Big 8 days.

Morrow arrived at CKLW in 1965, having already established himself as John Paul Jones at WTRX Flint, Michigan. (he also had a musical history, having sung bass on Jack Scott's 1960 hit What in the World's Come Over You.) On being hired at CKLW, Morrow certainly wasn't happy when then-general manager Bob Buss told him he'd be using the air name "Duke Windsor." But, as Morrow relates to David Carson in his excellent book Rockin' Down the Dial: The Detroit Sound of Radio, he had little choice but go along if he wanted to be on the air at CKLW.

Morrow regained his real name when he moved to WIXY Cleveland in September, 1966. It was the beginning of a hugely successful career in Cleveland radio that also saw him work at WWWE, WERE and WQAL. Named national deejay of the year in 1970, and tabbed Mr. Cleveland by Mayor George Voinovich in 1979, Morrow left WQAL in June, 1999 for a short-lived "retirement." He "unretired" about a month later to focus on his advertising/promotion company, The Larry Morrow Group.