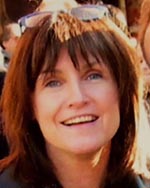 She almost became a VJ, but Meg Griffin preferred to remain a DJ.

Griffin - who started her disc jockey career in 1975 alongside Howard Stern at WRNW in Briarcliff Manor, New York - was originally set to be a VJ on MTV when it launched in August, 1981. However, she decided against it at the last minute and Martha Quinn replaced her.

Griffin's half-century in radio has included stints at K-Rock (WXRK), WNEW-FM and WBAI in New York. "Megless" has also jocked on WLIR on Long Island, WMMR in Philadelphia and University of Massachusetts Boston station WUMB-FM.

Griffin is a long-time host at Sirius-XM, dating back to before the 2008 merger of the two services. She was in a 2015 documentary about radio DJs in I Am What I Play, directed by Canadian Roger King.