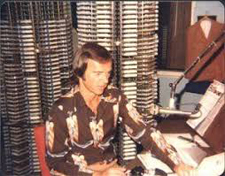 Thunder and lightning are in the air but the real excitement is on the air.

As unsettled weather threatens the New York City area, George Michael is his usual smooth self holding down the evening shift at WABC. Few, if any, Top 40 jocks were as polished as "King George," who spent five years (1974-1979) at WABC after an eight-year (1966-74) run at Philadelphia's WFIL. He was just as adept at television - his 27-year run (1980-2007) in TV sports was highlighted by his Emmy Award-winning The George Michael Sports Machine.