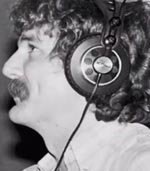 After nearly two decades spent mostly in the east, Jack Armstrong moved to the Golden State.

Armstrong spent more than a decade in California radio, beginning in 1978 at KTNQ Los Angeles. Three more L.A. stops would follow: KHTZ, KFI and KKHR. He would also jock at KFRC San Francisco and KBOS Fresno, California, before returning to his home state of North Carolina in the '90s. He died in 2008, aged 62.

NOTE: Thanks to Mike Hagerty for confirming the date!