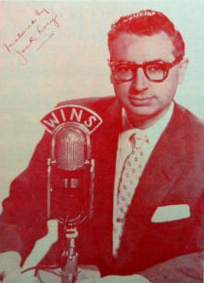 In a ground-breaking move, WINS dropped its long-time Top 40 format on April 19, 1965 (see Rock Radio Goodbyes), becoming only the third station to adopt all-news programming in the U.S. So ended a long tradition of music programming at WINS, whose beginnings can be traced back to 1924, when it was housed in Gimbels Department Store as WGBS. Future baseball broadcast legend Mel Allen was a WINS DJ in the late '50s. Alan Freed, Murray the K, and Bruce Morrow (Cousin Brucie) would follow in the '50s, along with Mad Daddy, Paul Sherman, Jack Lacy, Stan Z. Burns, Stan Shaw and others.

After WINS went all news, Lacy worked at WBAL Baltimore and KIQQ Los Angeles. He died in Spain in 1996, aged 79.

We'll probably never know, but what's with all the pauses in the John Gleason newscast beginning around 19:26? Seems odd for an otherwise excellent sounding announcer. He's distracted by something.